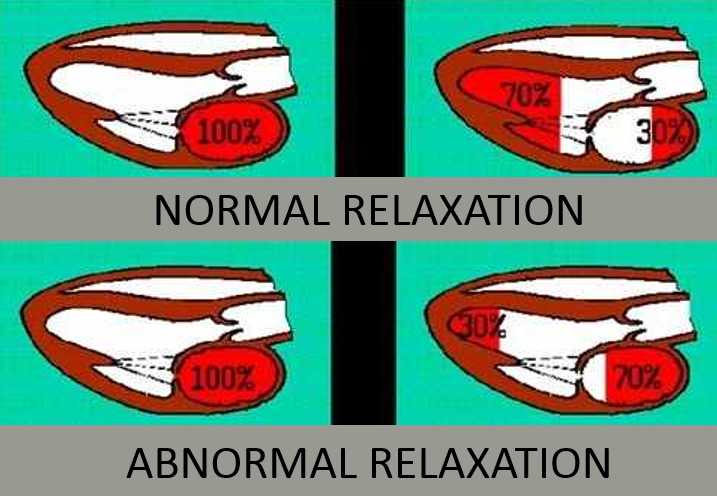 DIASTOLIC DYSFUNCTION – ANOTHER WAY TO SEE IT!

We are going to talk about how the LV fills up. It fills due to several factors, but the three main factors associated with it are its relaxation, its distensibility** and the LA contraction. Relaxation is an active process that spends energy, and it lasts only for the initial 1/3 of the diastolic period but is responsible for close to 70% of the final diastolic LV volume. 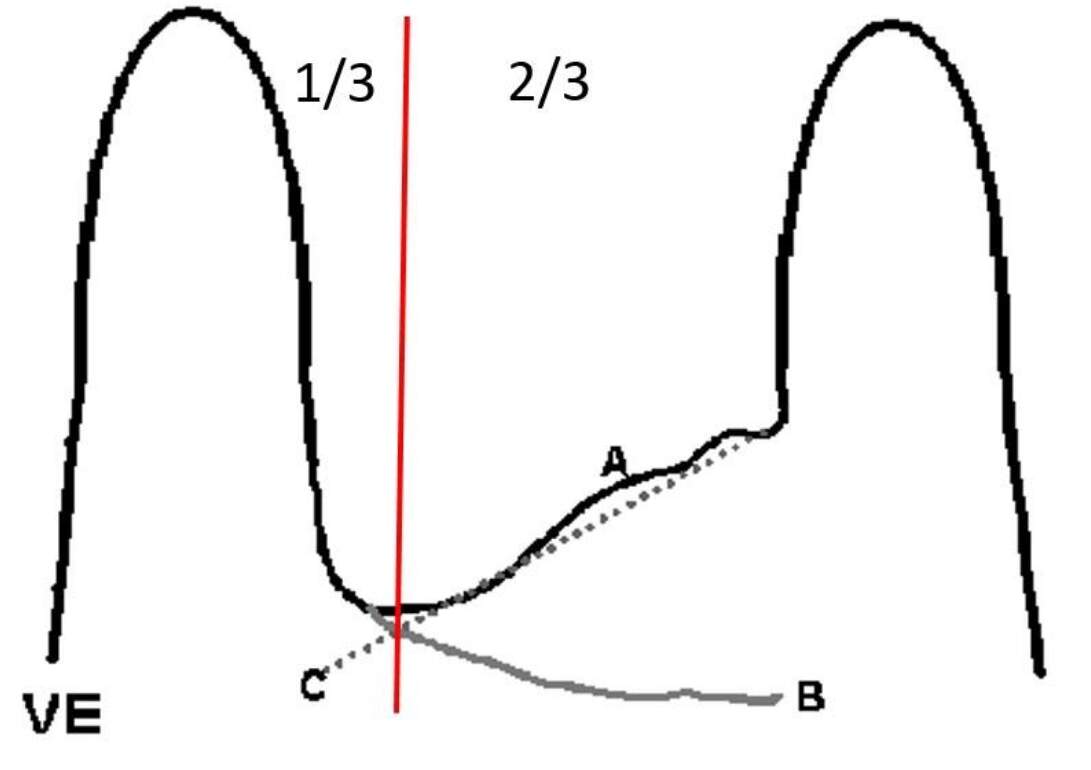 Relaxation accounts for the decline in LV pressure even though the mitral valve is already opened and the blood is rushing in. 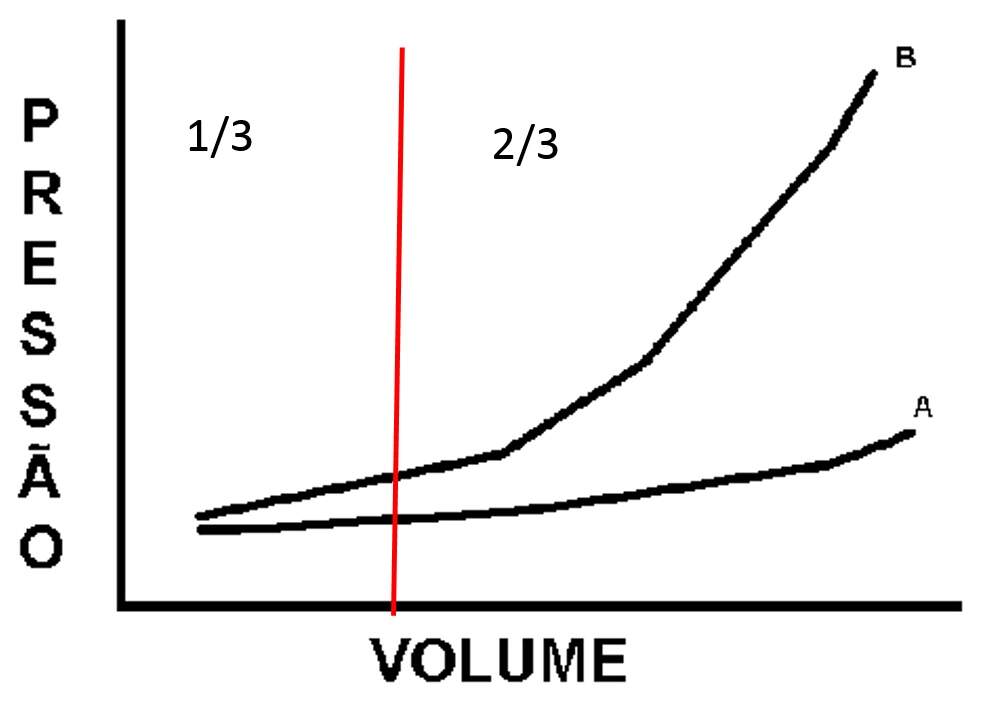 Distensibility is nothing but a pressure/volume relationship of a container (LV). During the initial 1/3 of diastole, it is not essential since there is not enough blood in the cavity and the LV is still relaxing. However, during the finals 2/3 of the diastolic period, it has a significant role. Relaxation is over, and as blood keeps entering the LV, the pressure rises. At the end of the diastolic period, the LA contracts and the last amount of blood comes in.

Now, if there is a problem with relaxation, but yet normal distensibility, this filling process inverts, and 30% of the final volume enters during the initial 1/3, since the LV walls are not relaxing properly and it does not cause a negative pressure that sucks blood, besides keeping a tonus longer than just the initial 1/3. In this case, the last 2/3 of diastole accounts for 70% of the LV final diastolic volume. All diastolic dysfunction starts initially with only a relaxation problem. Low distensibility comes later in the process of diastolic dysfunction, even in restrictive cardiomyopathy. Once we all agree with the essential basic tenets, let´s see how the M mode can show easily if the relaxation of LV is normal. If the LV fills typically 70% of its final diastolic volume during the initial 1/3 of diastole and only 30% during the last 2/3, it is evident that the LA empties much more during the initial 1/3 period. That can be seen in an M-mode showing the aorta and the LA. Notice how the posterior aortic wall moves back intensely right after aortic valve closure with a considerable decrease in LA size and then more slowly during the remaining of diastole and shows a small back displacement with the atrial contraction. This is an important sign of normal LV relaxation. It is a good sign as long you keep the two aortic walls pretty much parallel.

If the relaxation is slow and abnormal, only 30% of the final LV diastolic volume will leave the LA to enter the LV during the initial 1/3 period of diastole. The final 70% occurs during the last 2/3, and the M-mode will show a mild back movement of the aorta right after aortic valve closure and a small decrease in the LA size. The reduction in LA size (and the final return of the aorta) is seen mostly during the last 2/3, mainly during atrial contraction. This is the first and easy sign of abnormal relaxation. 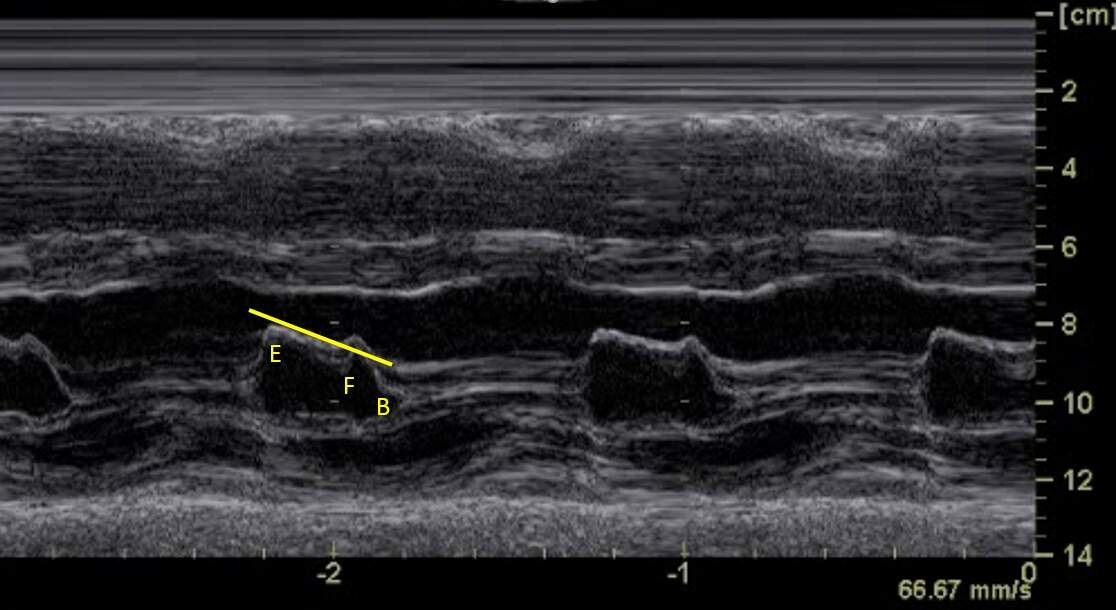 The second easy sign is the EF slope of the mitral valve. Except when there is rheumatic disease, a slow EF slope (eyeball or less than 70 mm/s) is highly specific for poor LV relaxation. However, the sensitivity is VERY poor. (B bump during mitral closure only happens when compliance is low).

Now the most accurate sign of decrease LV relaxation: the displacement of the posterior mitral annulus as seen by 2D echo.

However, due to temporal resolution, the displacement of the mitral annulus is better demonstrated by M-mode echo.

Now, and only now if you have followed so far, you will understand the algorithm below: 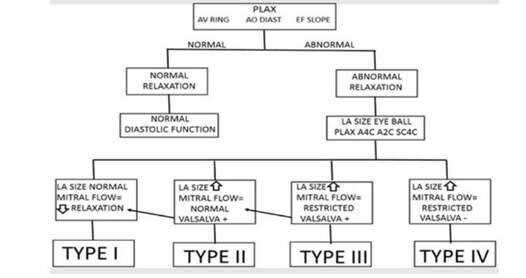 In a parasternal long axis view, the first thing I analyze is the relaxation of the LV. I use three signs:

1) the movement of the posterior AV annulus or ring by 2D echo and also by  M-mode, since 2D echo with its lower frame rate can betray you. M-mode is much more trustful even though difficult to get for those who did not learn how to use it. The AV ring movement is entirely different from tissue Doppler of that region since it demonstrates displacement and not velocity, and is THE MOST reliable sign for depicting the status of LV relaxation.

2) Most of the time the diastolic return of the aorta, indicating when the main change of LA size happens, will agree with the AV ring. If it doesn’t, the AV ring takes precedence.

3) Then I will check the EF slope of the mitral valve. Except when there is rheumatic disease, a slow EF slope (eyeball or less than 70 mm/s) is highly specific for poor LV relaxation. However, the sensitivity is VERY poor.

In other words: the AV ring will almost decide for itself the LV relaxation status. Then, for all the subsequent steps, I know already how is the LV relaxation. When it is normal, you will see that LA size, mitral flow Doppler, response to Valsalva and tissue Doppler will all be normal. When it is abnormal, I will check the LA size (eyeball) in ALL the 2D views, mainly the subcostal, and decide if it is enlarged or not.

If LA size is normal and mitral flow compatible with poor relaxation (eyeball, E<A and prolonged relaxation time) then we have TYPE I diastolic dysfunction.

If LA is enlarged (and no mitral regurgitation more than trivial) and mitral flow is normal, it is TYPE II (pseudonormal). Since we have detected by the AV ring; and/or AO diastolic movement and/or EF slope that the LV relaxation is decreased and, hence, the mitral flow should be compatible with poor relaxation and not a “normal” aspect.

Besides this certainty, we always perform a Valsalva maneuver that will enhance our conviction of TYPE II. Important to say that if you consider the mitral flow as normal and not pseudonormal, then you have a problem since you would have no reason for the LA enlargement.

If the mitral flow is restrictive (eyeball A<50% of E and short relaxation time) than the Valsalva maneuver will decide if it is TYPE III (Valsalva reverts mitral flow to normal, i.e., pseudonormal stage) or TYPE IV (no reversion with Valsalva).

Occasionally the mitral flow is compatible with poor relaxation, but there is an enlarged LA with no other reason than due to increased pressure. Then we consider TYPE II otherwise there would be no explanation for the LA enlargement. A big LA is a more visible sign than the mitral flow, which varies a lot, depending on where you are analyzing inside the LV cavity.

You may ask what is the use of spectral tissue Doppler? Almost none, even though I register it for two reasons: First, to show the students that most of the time it is wrong, being frequently normal, in TYPE II; III and IV. Usually, it is right, being abnormal, in TYPE I (but then it is not necessary since the mitral flow is already abnormal, no need to detect pseudonormal). Second, so the students have the continuous reassurance that it is useless and will not give it importance to change their diagnosis. No use for mitral flow progression velocity. Sensitivity is too low.

I am aware that these affirmations contradict what is in the literature, in consensus and guidelines. That’s the way I do it, and it’s nothing but my opinion based on continuous observations in patients done one by one, and not in populations, were statistics correlations and tests of significance may be perfect, but they do not work for a single patient. However,… it’s just an opinion! You may test it and see by yourselves. 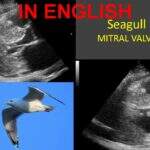